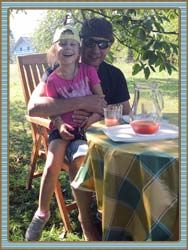 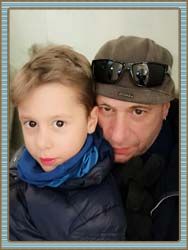 This video was filmed on October 6, 2020. A month earlier on September 3, my wife Dr. Christina Hohenwarter sent a letter to Judge Andrea Wetschnig at the court of Hermagor, and she asked the judge, that is the Austrian authorities, to protect her children from their mentally ill and violent father who wants to hurt them.

She wants sole custody and she is using her professional status as a senior neurologist to make from the father of her children a mentally ill man who wants to hurt his own children and, as her lawyer, Walter Dorn, filed in court the day after on September 4, 2020, her man, this is me, should receive therapy and be locked in a psychiatric clinic.

A few months later, and because of this website, the highly educated and mother of our children Dr. Christina Hohenwarter filed criminal charges against me aiming my imprisonment. And indeed, on June 25, 2021, I was arrested and imprisoned in the awful jail of Klagenfurt until October 25, 2020.

Ten days before my release from prison, on October 15, she testified to the Bundesamt für Fremdenwesen und Asyl the same lies she had testified in the court of Andrea Wetschnig on January 10, 2019.

On October 25, instead of going to my home in Villach, 4 policemen from the Fremdenpolizei picked me up from the jail in Klagenfurt and drove all the way to Vienna where they locked me in another jail. Two days later on October 27, they drove me to the airport and escorted me all the way to Athens.

I was deported from Austria like a common criminal and I cannot come back for 6 years.
I will never again see my children and my children their beloved father.

She ignored the lies of my Oberärztin in Gailtal-Klinik wife because she knew that one day she would need the services of my wife as a patient. This day came in the summer of 2021, when she checked in Gailtal-Klinik for 4 weeks of neurological rehabilitation because of Covid-19 infection, as she wrote herself to the Regional Court of Klagenfurt requesting her rejection from any case between me and my wife.

Judge Andrea Wetschnig is the only person on earth with neurological symptoms after a covid infection!
She just had a pre-existing neurological condition for which she was aware of in January 2019!
The rejection was approved but too late for me. In these two and a half years she took every possible decision in the favour of my wife Dr. Christina Hohenwarter, which is the reason I had called Andrea Wetschnig several times in writing but also verbally in her court as being the secretary of my wife!
Klicken Sie hier, um das unmenschliche Verbrechen zu sehen, das Richterin Andrea Wetschnig am 28. Januar 2019 an mir und meinen Kindern begangen hat!