This below is one of the stories that prove the statement of Dr. Volker Tomantschger about Dr. Christina Hohenwarter’s father. Volker is the only one who made the “mistake” to say the truth in a court record: 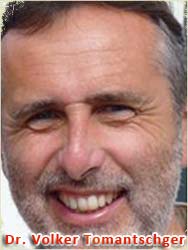 This is what I can prove and Volker's statement is in the report of Dr. Hannelore Legat, the specialist (Sachverständige) assigned by the court.
What I cannot prove is what Dr. Christina Hohenwarter had told me already in 2011, before her father had even met me:

On August 2, 2018, we have had an argument because my wife Dr. Christina Hohenwarter cancelled our scheduled trip to Greece because her father did not want that I drive to Greece with my children!!!! In his eyes was dangerous and of course I had to obey Hans Hohenwarter!

, filmed on July 29, just three days before our argument about her father. This is how we were living our lives almost every day!

Watch this video on your left, if on a desktop, or above, if on mobile, to see the ausufernder "Aggressivität" und "Psychoterror".

On October 11, 2018, I had had another confrontation with her father Hans Hohenwarter.
Dr. Christina Hohenwarter decided to destroy her family and announced to me that she wants a divorce.
A week later on October 17, she visited her lawyer Dr. Michor and filed for divorce.
After October 17, at home our life continued as usual, that means by having fun, as you have just seen in this video of August 26! On October 30, 2018, that is just two weeks after Dr. Christina Hohenwarter visited her lawyer to file for divorce, I filmed this video,
In this video, you see a woman who two weeks earlier visited her lawyer Dr. Michor to file for divorce. And above all, as per her testimony on January 10, 2019, and all documents she files in several courts ever since this date, she was living with a very dangerous, aggressive, violent man, under ausufernder "Aggressivität" und "Psychoterror"!
This is now the unbelievable part that no one has yet understood!

This video, on your left, or above if on a mobile device, filmed on November 4, was even better! She was dancing even on the bar of the kitchen having fun with me and our children, AS ALWAYS, living, however, under ausufernder "Aggressivität" und "Psychoterror" since August, as per her false testimony in a court of law on January 10, 2019!

The next day November 8, her lawyer Dr. Michor filed for divorce and on November 19, I received the summons (Ladung) for the hearing in the court of Hermagor for January 9.
The Ladung can be read by clicking here. (Richterin Andrea Wetschnig would preside the hearing!)

The very next day on November 20, 2018, Dr. Christina Hohenwarter sent me a text message from Gailtal-Klinik saying:

sent a week later on November 28! "No one is more important than you or my kids" and plenty of hearts and love!!!!!!!

Obviously, she enjoyed living with a monster who terrorised her!!

It does make sense, does it not?

Note: Richterin Andrea Wetschnig knew all of it because she was the judge who received the petition for divorce on November 8 and the petition to cancel it on December 19! Yet she “believed” that Dr. Christina Hohenwarter was living under ausufernder "Aggressivität" und "Psychoterror" for six whole months! 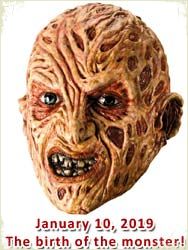 A week later on December 28, Dr. Christina Hohenwarter called the police on me and just two weeks later on January 10, 2019, in a court of law the same lawyer advised my wife to make a monster out of me in order to get me out of our house in Presseggersee.

And Christina Hohenwarter did make a monster out of her husband and father of her children. And to win sole custody, two and a half years later Dr. Christina Hohenwarter made a “mentally ill" (“psychisch Krank”) man out of me that I want to harm my own children and eventually she locked me in jail!

Who can understand this story ????


Nothing in this story is my imagination or lies as hers!
It is videos, pictures, and messages which reflect reality!

What does this story mean?

Does it mean she was living under ausufernder "Psychoterror" and "Todesangst", as she testified in court?
Or does it mean that her decision to divorce me and destroy her family, and eventually my life, was not her own decision but her father's ???

Have you seen the happiness of our children in these videos? In all my 15 hours I’ve seen my children in almost three years, both of them were asking me: "Why Papa are not coming back home? We have missed the fun we have had with you"
×
×
× 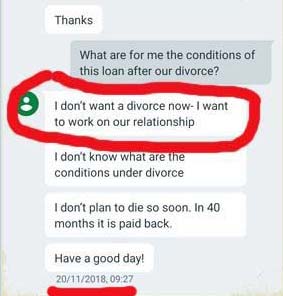 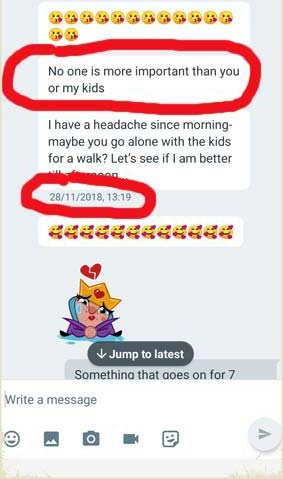